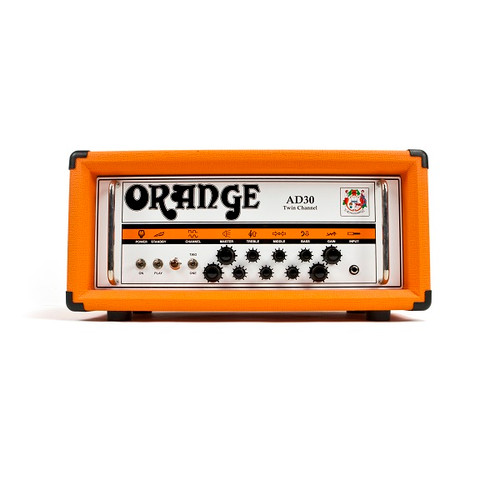 The AD30 really is a one-stop shop for all shades of pure British chime and crunch. Every retro, Class A tone you need is right here, thanks to four EL84s, a GZ34 (5AR4) valve rectifier and a pair of 2-stage channels, each providing a different flavour of no-nonsense Orange tone. Whether you’re looking for shimmering cleans, edge-of-breakup jangle or fire-spitting classic crunch, the AD30 has it all in a simple, road-proven package.

Two completely independent channels, each with two stages of gain and and a straightforward control layout, make it effortless to dial in any combination of vintage tones. Voiced to be similar enough to work together but different enough to have their own characters, both channels will go from crystal-clean to thick-and-filthy, or anywhere in between.

Interacting beautifully with the EL84 power amp, Channel One is good enough to be an amp on its own, ranging from bell-like chime to Classic Rock grit. Channel Two is the same personality – but in a bad mood! A touch more gain and a snotty, aggressive edge make this the perfect channel for cutting leads and pounding riffs.

The GZ34 rectifier valve is crucial to the AD30’s great tone. Natural compression and sag in the power stage provide a responsive and dynamic playing experience, adding just the right amount of sweetness to the lively, in-your-face character of the amp.

Like all Orange valve amplifiers, the AD30 uses our own proprietary transformer design. Built in the UK, this painstakingly developed recipe is what gives the AD30 not only its unrivalled tone but also its reputation as one of the hardiest amps on the world’s biggest stages.

This product hasn't received any reviews yet. Be the first to review this product!